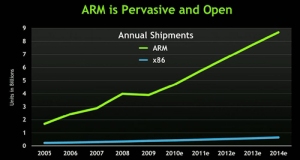 ARM CEO Warren East says the embedded device sector will be be ten times larger than mobile in a few years.

As part of its first quarter results for 2012, the microprocessor company said the number of chips based on its architecture increased by 15 percent during the period to hit 800 million. In comparison, chips for mobile phones and computers remained fairly static compared to the year before at 1.1 billion units.